Corporate Event Photography Tip: How To Take A Group Shot Of 40+ People In 30 Seconds Or Less – Line Them Up & Shoot – The Details Make A Difference – Read More Below… 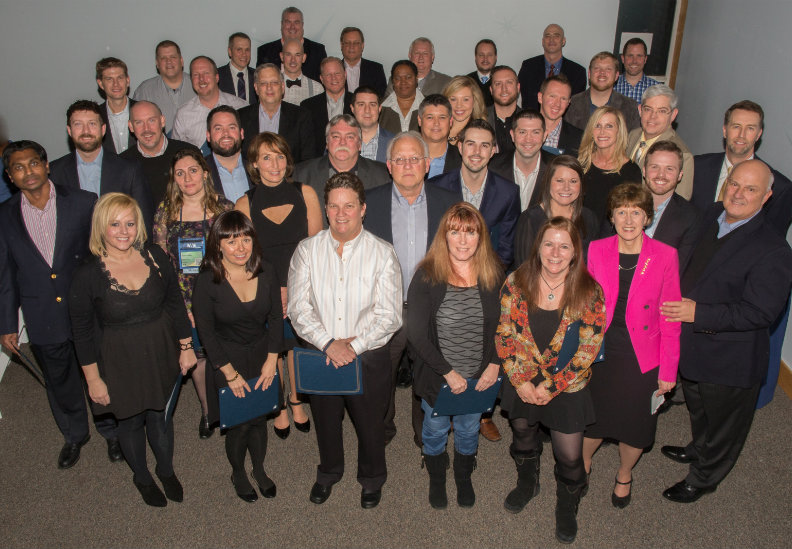 You have to read the details below to appreciate this group shot.

Yes, you could probably pick the above group shot apart for various reasons, but when you know the details behind it, you should agree that it's a nice group shot considering all of the circumstances.

This was a line them up quick and shoot group shot. It wasn't loads of time to see the height of the people involved because names were constantly being called. I had no choice but to get this shot as quickly as possible. You'll find more details below:

1) I was informed before the fast paced, non-stop, awards ceremony that I would have a group of about 50 people to photograph. The conference call discussing the event stated that the largest group would be about 15 people. That's what I recall anyway because I asked when they said "We'll need group shots of award recipients." Don't get me wrong. This was a great corporate event and we all got along well. I'm simply saying that I was a little surprised to know that I had a group of about 50. That's when my experience (not stress) kicked in.

2) After I was informed that I would have a group of about 50 people, I had to figure out how I could get each persons face in the shot when they would all be standing on the same level. I asked the facility if they had a step stool. Thankfully, they did. So that's what I stood on to see all the faces. I had already seen a ladder there, so that was plan B.

3) The width of the group shot is the maximum width that I had to work with. The wall was to my right and tables for dinner was to the immediate left.

4) On the right side of the image, it may appear I could have put people there. However, there was a 6 foot table with items all under it that couldn't be moved.

5) The shot was taken in the corner of the room just off to the side of where people were coming up and receiving their awards.

6) I had my usual event gear (which is a lot) with me which means that I did not have a studio strobe, but I did have my (2) Canon 600 hotshoe mount speedlites (flash). I set the speedlite that was mounted to my camera hotshoe to FULL MANUAL power to get enough light to have the front row and the back row in focus.

8) Guess what, after that, the two key people on the far right stood back up front which was right behind where I stood to shoot this and more names were called for more awards.