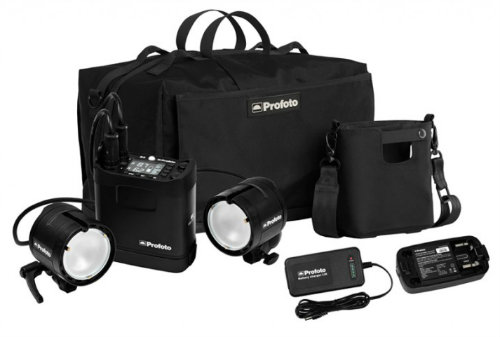 Image From Profoto.com Of Profoto B2 - Two Head Kit

I own the Profoto B2 OCF System, so this post is coming from real world use for several weeks now and not just a one time rental or speculation based on what others are saying about the Profoto B2 Kit.

It's interesting to read some of the negative comments from around the web about the system mostly coming from those who DO NOT OWN IT. Many of the comments are things like "It's too expensive." or "It's not enough power."

Well, the reality of the Profoto brand is that they are not the lowest priced lighting solution. Anyone familiar with their brand should know that and not comment about price. If Profoto is not in someones budget, I get it. But don't bash a company about price. Just move on to a lighting system that fits both need and budget.

As for power, that depends on what someone needs or thinks they need as far as power. So this area is subjective. However, I'll cover power more below as I get into my review of the Profoto B2 OCF System.

Below are a few things that I wish were different:

1) One head is 250WS, but when plugging in a second head to the pack, it splits the power to 125WS per head which is 1 stop below 250WS. However, if the lights are several feet apart, that allows for light coming from two different areas rather than one area at 250WS.

2) I don't like the build of the TTL trigger that goes on the hot shoe. Although I love the functionality that it offers, it doesn't seen as well made and solid as the rest of the kit. For a $400 item, I think it should feel more solid than it does. However, it gets the job done. I'm just scared that I'm going to drop it and it break all apart the way it feels in my hands.

3) The TTL is not 100% consistent. I have fired the system many times in TTL and occasionally,  I will hear a POP which is my que that the system overpowered the exposure. The image becomes super bright and NOT usable. I have wondered at times if my system is defective. However, this doesn't happen so often that I  want to return the system. It's just something that I have noticed that I don't really like. But in the next section, you'll read how I love TTL.

Below are things that I like and even love about the system:

1) It's lightweight and very portable. The complete system pictured at the beginning of this post will fit in the shoulder bag pictured and is so easy to carry around.

2) It's powerful. OK, I stated power is subjective. However, at 250WS, it is several times more powerful than a speedlite and easily provides me with enough on the go power for the type of work that I do on location on a regular basis. I recently read a comment from someone saying that they would not buy the system until it is at least 500WS. The difference in 250WS and 500WS is ONE stop. That means that 250WS at 800ISO is the same as 500WS at 400ISO. That's a simple adjustment to make. However, I do agree that 250WS doesn't cover every situation but neither does 500WS. Any lighting system has to have enough power for YOUR type of everyday shooting needs. If 250WS doesn't work for you, then the B2 may not be the right fit for your lighting needs.

3) It's well made. Other than the trigger that I mentioned previously, I feel that everything including the bag pictured at the top of this post are well made.

4) The system not only uses the portable, lightweight OCF modifiers and accessories but also works with numerous other Profoto accessories. Oh and speaking of the OCF accessories, they go hand in hand with portability and being lightweight like the kit pictured at the top of this post.

5) I LOVE, LOVE, LOVE this feature. What's that? It's the ability to shoot in TTL and then flip to manual to either lock the system into the exposure or make adjustments. It's a feature that I use on a regular basis. Yes, TTL should be consistent. However, I love this particular feature.

6) I LOVE the HSS feature (High Speed Sync) which allows me to shoot at shutter speeds faster than my camera sync speed. This feature is very important when shooting outside in daylight.

7) I LOVE the crazy fast recycle time. Even at FULL power, it has a 1.3 second recycle and is far faster at lower power settings.

8) I LOVE the fact that a battery is completely recharged in 45 minutes. That means that chances are pretty good that before another battery is drained that the one recharging will be ready to go. But the system can be plugged in to an outlet and used while also charging the battery.