On Thursday, I had the opportunity to hear Bill Davis, Owner of Team Nimbus in Raleigh, NC, speak at Triangle Lunch Talks .  I decided to sit on the front row so I could capture some images of Bill as he was speaking.  Although this image may look posed, Bill was pausing for a moment while speaking.  I used my iPhone 4S with the Camera Awesome App.   It's a free app, but I paid $9.99 to have all the bells and whistles like this nice film looking frame which reminds me of the early 80's when I started in photography. 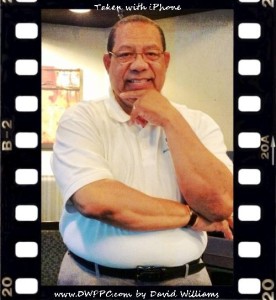 One key thing that I did while posting to all these places was to use a  TITLE.  In most cases, I did something like "Triangle Lunch Talks: Bill Davis of Team Nimbus." By doing this, I not only have a chance of the image coming up for Bill Davis and Team Nimbus, but it is tied to Triangle Lunch Talks as well. Remember, I was able to do all of this from my phone, on the front row as Bill was speaking. I was there anyway, so I didn't have to sit down in front of my desktop later.

Take Away: Q: What is the best camera to have? A: The one you have with you. Most of the time the camera you will have with you will be your phone, so have an app or multiple apps on your phone in order to be able to do something like I did above. So what do I get from all of this? I am glad that you asked. This image is posted on all my accounts which ties it back to me when it is found. This becomes a win-win for all parties: Bill Davis, Team Nimbus, Triangle Lunch Talks and David Williams 🙂

The video below is one that I shot of Bill Davis in Studio with my professional equipment: